The march to Glasgow... 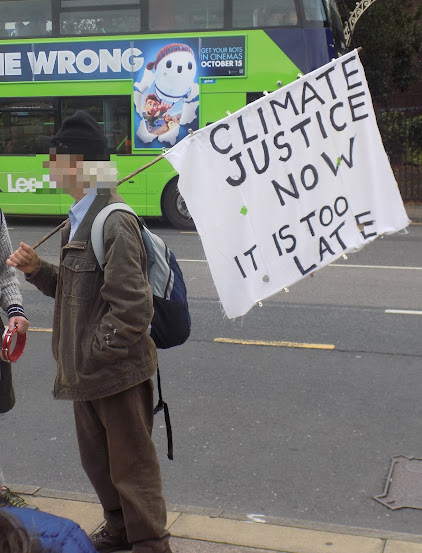 Last weekend, my family and I decided to pay a visit to the Spanish activists of ''Marcha a Glasgow'': a group of climate protesters walking over 950 km from Portsmouth to the COP26 conference in Glasgow. One of the activists is a family relative, so we decided to visit them on their closest stop to us, Leeds.

The day started with a drive, the duration of which I spent happily with my mp3 player. The music seemed an appropriate companion to the Yorkshire landscape.
We joked that it would be ironic if our journey to a climate event was halted by the protesters of ''Insulate Britain''.
Alas, we made it in good time and were welcomed with pleasant weather.

Upon arrival, we met with the activists and their supporters.
They had a large turnout which added to the atmosphere. It was great to see our relative who I mentioned earlier, as we had not met since we stayed with them in Spain. A short amount of time later, the march began. The feeling of unity was aided by the samba band which also attended.

Read more »
By Reuben W at October 23, 2021 No comments:
Email ThisBlogThis!Share to TwitterShare to FacebookShare to Pinterest

After a fun-packed weekend in Manchester, I have decided once again to unravel my thoughts onto this here blog. I hope you enjoy.

We (My brother, grandmother and I) started our trip by getting a train to Manchester via York. It was a very nice journey, apart from the fact that the trains were very busy for a Sunday... Summer holidays I suppose?

While on the train, I went over the weekend's events to come. These included:

1. Visit the Manchester Art Gallery and Art Club exhibition.
2. Check in to Premier Inn.
3. Eat dinner at The Beefeater.
4. See the Roman ruins and canal.
5. Visit the Science and Industry museum, including its ''Use Hearing Protection'' exhibition.
6. Travel home.

As you can see, the days ahead were looking to be extremely exciting indeed. I enjoyed the rest of the journey with this thought in mind.

When we arrived in Manchester, we headed straight to the information desk in search of a map. Although there were none left, the man behind the glass did offer us some expert directions.
With the instructions still fresh in mind, we made our way from Manchester Picadilly to the Art Gallery.

Now, a side note: although the rest of the museum was great, it was clouded by the anticipation for the Art Club exhibition.
All through lockdown, our family had watched Grayson Perry's Art Club on Channel 4. As soon as the possibility of an exhibition was mentioned on the show, I had my heart set on going.
With that in mind, you can probably understand why I wanted to see the exhibition more than anything.

Read more »
By Reuben W at August 19, 2021 No comments:
Email ThisBlogThis!Share to TwitterShare to FacebookShare to Pinterest

Down South! My thoughts...

Recently, my brother and I started a journey that would eventually end in Sussex. It was the first time we had truly been down South in a good while, mainly because of the current pandemic. I enjoyed it immensely and will walk you through some of the highlights:

To Kings Cross (and beyond)!

We started the trip by traveling to London Kings Cross. With pre-booked seats and a saver railcard, the journey was no fuss at all. For the majority of the journey, I read my current book: ''The Wind-Up Bird Chronicle'' by Haruki Murakami. So far it's an interesting book about a man who has recently lost his cat, and his wife who hires a psychic to try and locate it; although it is early days, the cat has not yet been found.

When we arrived at KC, I noticed a large construction site to the right of the station.

After doing some research, it seems this large construction site is in fact a new Google HQ being built. Although the idea and scale of this project seem impressive, I wonder how it will survive with the rise of remote working from home.

Alas, we crossed the road from Kings Cross to St. Pancras International, aiming to catch a Thameslink service towards Brighton. Before we did though, we noticed the piano in the station was free. I played ''Lady Madonna'', while Zak opted for some Chopin.
We were in a bit of a rush to get to the platform, and when we did, the train was just pulling in. If Zak or I were to have played a few more verses, we may have missed the train.
Still though, we did make it. This particular journey was very quiet and peaceful, and the window view of Greater London was pleasant.